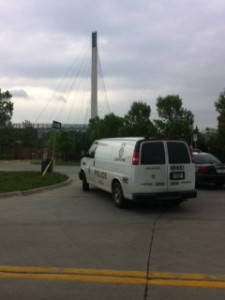 Police are investigating a shooting at the pedestrian bridge linking Council Bluffs and Omaha.

The pedestrian bridge that links Council Bluffs and Omaha was the scene of a triple-shooting early this morning.

Police say three people were shot on the Omaha side of the Bob Kerrey Pedestrian Bridge around 1:30 A.M. John Nepper lives in a high rise condo nearby and says the sound of sirens woke him up.

“I was thinking it might be a fire but there weren’t any alarms going off so that’s why I got up and investigated,” Nepper says. Omaha police say witnesses told them a number of people were on the bridge when a disturbance started, followed by gunfire. One victim was taken to a hospital in critical condition, the other two were in serious condition.

Nepper says the incident caused a lot of commotion. “There were about seven or eight guys over their investigating and they just had a lot of flashlights,” he says.

“Also, there was a helicopter flying overhead.” One suspect was taken into custody while police were looking for more suspects.

No names were released. The bridge remains closed to the public.