You are here: Home / Fires/Accidents/Disasters / Trucker rescued from floodwaters in Jasper County 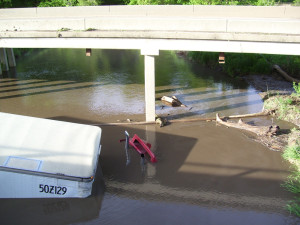 Police officers entered floodwater in central Iowa early this morning to rescue a truck driver trapped inside his cab.

Jasper County Sheriff John Halferty says a motorist on Interstate 80 called 911 after noticing “a large wet spot” and debris on the roadway.

“He arrived at the bridge over Prairie Creek and he observed a tractor trailer that was down between the two bridges – between the lanes of the interstate,” Halferty said.

“It was pretty dark, but he could see the tractor part of the semi was almost completely submerged in water.”

Newton Police Officer Adam Herman and Baxter Police Officer Joe Bartello also responded and all three men jumped in the flooded creek. “They were on or around the top part of the cab and they determined the driver was still inside and still alive. He was in a small air pocket,” Halferty said.

“They were eventually able to get him out. As they were working on getting him out, Colfax Fire personnel arrived and assisted with ropes.” The truck driver, 70-year-old Dwayne Michael of Granger, was taken to a Des Moines hospital. He’s believed to have non-life-threatening injuries.

Halferty said the officers arrived just in time. “I don’t know how long he could have survived,” Halferty said of Michael. “You know, it was pretty dark and the water was at least 12 feet deep. The creek, the current, was moving fairly fast. It was a pretty scary situation and I was just amazed, when I saw it, just how deep that water was.”

Authorities are still investigating what led Michael to drive off the interstate.