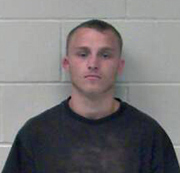 A young man is facing child endangerment charges following the hospitalization of a two-year-old boy in southeast Iowa. Ottumwa Police Chief Tom McAndrew says 19-year-old Dustin Armstrong was arrested this morning in connection with the incident on April 22.

Armstrong is charged with multiple acts of child endangerment, and one count of willful injury. The toddler is identified as Brayden Young.

McAndrew says Armstrong was the boyfriend of Brayden’s mother. Police were called to an Ottumwa home at 5:30 p.m. on April 22 on the report of a child who was unresponsive. The boy was eventually flow to University Hospitals in Iowa City for treatment.

Chief McAndrew could not discuss specifics about the injuries and said it’s been a couple of weeks since he’d received a condition report. “It is my understanding that the toddler is going to go through a very long rehab process and we don’t know exactly the long-term prognosis for the child,” McAndrew said.

As of Monday afternoon, Armstrong was being held in the Wapello County jail on $50,000 cash bond. Chief McAndrew says it took several weeks to make an arrest because doctors and police officers had to compare a lot of notes after they were told differing stories about how the injuries happened.