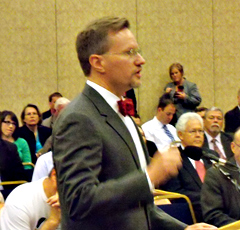 Mark Weinhardt speaks to the Iowa Racing and Gamng Commission.

The Iowa Racing and Gaming Commission today refused to reconsider its April 18th approval of a land-based casino license for Sioux City.

Penn Gaming, the company which operates the current casino boat in Sioux City, lost its bid for the land-based license. The company’s attorney, Mark Weinhardt, addressed the commission at its meeting in Osceola this morning.

“We are asking the commission to reconsider and reverse its decision because that decision was illegal in at least a couple of different ways,” Weinhardt argued.

“It sets a new and disturbing precedent for the way gaming is going to be regulated in Iowa, and because there were some serious irregularities with the process by which that decision was made.”

Weinhardt said the Argosy Riverboat should have had the first opportunity to get a land-based license and awarding the license to another company deprived Penn Gaming of due process.

“That decision was a decision to revoke the Argosy license without any objection, defect, complaint or deficiency in its operation, but rather was simply a decision to take away its license once a land-based casino was opened, because apparently we prefer land-based casinos,” Weindhardt said. “This action is unprecedented in the history of Iowa gaming.”

Weinhardt said the winner of the land-based license, Sioux City Entertainment, was allowed to change its proposal, while others that sought the license were not. He also listed several other concerns about the license process. Penn Gaming has filed a lawsuit to try and reverse the awarding of the land-based license. Weinhardt directly asked the commission to resolve the situation by reconsidering their decision.

“There is a technical term that we lawyers use to describe the legal situation regarding gaming in Woodbury County right now: ‘It is a big fat mess,” Weinhardt said. “That mess is only going to get worse if what happens Sioux City Entertainment is allowed to go forward, break ground and build a casino when there are so many legal issues in the air.”

Weinhardt’s arguments failed to sway the commission, as there was no response when commission chair Jeff Lamberti asked if there were any motions on the issue.

“The request for us to reconsider and reverse our decision fails for lack of a motion,” Lamberti announced.

Lamberti commented on the issue after the meeting.

The plans for the new land-based casino in Sioux City will continue to move ahead barring any court rulings that would say otherwise.

Also this morning the commission set a deadline of September 3, 2013 for proposals for a new Linn County casino.  In addition, the commission is seeking bids from companies that would conduct a statewide survey to determine what the market is like for new casinos.