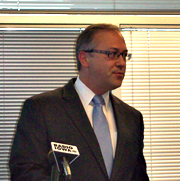 One of the Republicans who’s running for the U.S. Senate calls Bruce Braley — the likely U.S. Senate nominee for Iowa Democrats — a “vulnerable” opponent.

Young spoke this morning to about 35 people at the Des Moines Conservative Breakfast Club.

“We can win this senate race in 2014. I wouldn’t have gotten into this if I didn’t think so,” Young said.

“Congressman Braley is beatable. He’s vulnerable. He’s not as well-known, as popular as folks think or even he thinks — even in his own district. He has a very liberal record that is out of step with everyday Iowans, even more liberal than Tom Harkin.”

Young said the senate nominee Republicans choose in 2014 will start on equal footing with Braley.

“It’s almost like starting at a level playing field, in a way,” Young told reporters this morning. “…He has no primary and so his name isn’t out there as much as it’s going to be for myself, Whitaker, Culver, those kind of folks. They’ll be hearing our names, most likely, a lot more. It gives us a bit of an edge here…A primary will make us better. It’s not bad to be sharpened.”

Young misspoke. It’s not Culver but Sam Clovis and Matt Whitaker who have formally launched campaigns for the Republican Party’s U.S. Senate nomination.

Young’s speech this morning lasted about 14 minutes. He spoke from a script and did not take questions from the crowd of Republicans. Young got applause for calling for the resignation of U.S. Attorney General Eric Holder.

“Heads need to roll, but I’m not quite ready to bring back the guillotine,” Young joked.

During a brief question and answer session with reporters, Young called Grassley his “friend and mentor.”  Grassley will appear at a couple of Young for Senate fundraisers, but Young said that’s not to be viewed as a Grassley endorsement of Young’s candidacy.

“I told him upfront: ‘I’m not going to ask for your endorsement,'” Young said. “…Plus I’m David Young and there’s no kingmakers in this state. You’ve got to stand on your own two feet.”

“I thought he gave a very good speech,” Darrell Kearney, host of the breakfast club, said. “I thought he hit a lot of the buttons that I like, I mean the conservative issues.”

David Oman of Des Moines served as Governor Terry Branstad’s first chief of staff and then several years later ran for office himself, so Oman has some perspective on Young’s move from Grassley’s staff to candidate.

“It is much different to be running in your own right and introducing yourself, articulating what you believe and what you will do,” said Oman, who attended this morning’s breakfast. “…Ultimately David and the others who will run will sign their name on a affidavit. They will declare they are a candidate. It’s a much different role. It’s a harder role and you learn how big this state truly is.”

The Republican Primary could be crowded, too, as a few other candidates ponder jumping into the race. State Senator Joni Ernst has said she may run. Former state Representative Rod Roberts — a candidate for governor back in 2010 — is also considering the idea of running for the U.S. Senate.