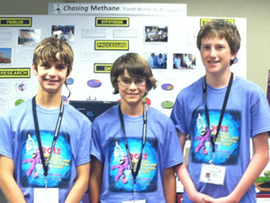 Three young men from eastern Iowa are representing the state at a competition in Washington D.C. called the e-Cybermission. Each team had to identify a real-world problem in their community and create a solution using science, technology, engineering and math.

Ethan Trepka is a seventh grader from Iowa City who’s heading one of the 16 teams from across the U.S.

“Our goal is to divert food waste from landfills because currently, when food waste goes to landfills, it is compacted and when it’s compacted, it decomposes anaerobically, which means without air, and that produces methane,” Trepka says.

“Methane is a harmful greenhouse gas that’s 25 times as effective at trapping heat in the atmosphere as carbon dioxide.” Trepka, who attends Iowa City’s Northwest Junior High School, says the solution lies in the biggest generators of food waste.

Trepka says, “My team’s goal is to have restaurants sort their waste because restaurants produce lots of waste and the waste would be diverted to be composted at a landfill which is aerobic, so it doesn’t produce methane.” Figures from the Iowa D-N-R show more than 13-percent of what goes into Iowa’s landfills is food waste, or about 350,000 tons a year.

The Iowa team, known as “Chasing Methane,” is trying to bring about the change. “We’ve made three trips to the Iowa state capitol to try to get a bill passed,” Trepka says. “Our bill would study sorting waste in restaurants. Our bill was passed through the Iowa Senate but was halted in the Iowa House.”

The team plans to return to Des Moines next session for another try. Restaurants are hesitant to comply as it would take time to separate the food waste and there would be the added expense of having someone haul it away. It might result in higher menu prices, but Trepka says, not much higher.

The competition concludes today with the naming of a national winner at 1 P.M./Central time. The top prize is a $5,000 savings bond for each of the three teammembers.