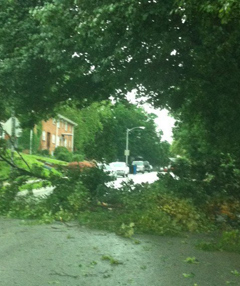 Much of Iowa was hammered with more heavy rains over the weekend. One of the hardest hit areas was Allamakee County in far northeast Iowa.

“All the water was rushing through…it was utter chaos,” Fruechte said. Waukon Fire Chief Dave Martin was among the dozens of people helping clean up the damage on Sunday. “The water was very bad, it was up on the buildings pretty high and all the basements are full. There’s extensive damage,” Martin said.

Larry Shellhammer, who serves on the Allamakee County Board of Supervisors, expects state and federal funding will be on the way.

“I know we’re over the threshold, so we’ll look for the (disaster) declaration from the state and then from federal, if we can,” Shellhammer said.

The Iowa Department of Natural Resources reports more than 80 campers were evacuated from Yellow River State Forest after 11 inches of rain fell there over three days. A car was swept away in the flash flooding on Saturday and has not been found. The driver of the car was able to climb through its sunroof to safety, before trees, other debris and flood water washed it under a bridge.