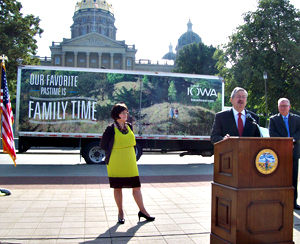 The State of Iowa and a dozen Iowa cities have split the $50,000 cost of an 18-month-long “rolling billboard” campaign to promote tourism within the state.

“These mobile advertisements publicize attractions, they highlight what Iowa has to offer and illustrate how departments work together to showcase Iowa tourism and programs that benefit the citizens of Iowa,” Larson says.

For example, the truck carrying the message from Cedar Falls focuses on the community’s status as a “bicycle friendly” community. Sioux City’s message highlights attractions like the Orpheum Theater and an indoor rock wall. Larson says each week, his trucks stop at more than a thousand different destinations and travel into all of Iowa’s 99 counties.

“The estimated advertising value at this exposure level approaches $60,000 per community, per year,” he says.

Governor Terry Branstad highlighted this new ad campaign during his weekly news conference this morning and a reporter asked the governor to name the most effective rolling billboard he has seen.

“Well, I don’t know, but we did one on our last campaign that worked out,” Branstad said, laughing.

The recreational vehicle Branstad traveled the state in during the 2010 campaign was painted with a huge Branstad for governor logo.

“But I think this is a wonderful idea,” Branstad said of the tourism campaign, “and I think it’s great to see the Alcoholic Beverages Division partnering with many state agencies and also with the tourism people around the state — the communities, the tourism and visitor bureaus.”

The images for the trucks are financed with about $25,000 in state tax dollars and another $25,000 from the ten cities involved.