You are here: Home / Education / U-I expects to have flood barriers down by start of fall classes 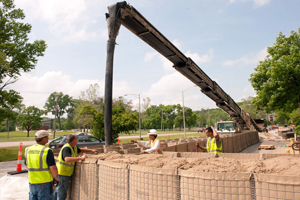 Workers filling HESCO barriers at University of Iowa in May. (U-I photo)

The University of Iowa campus will look a little different to students who return for classes at the end of August.

The school has started the process of removing the large sand-filled flood prevention walls known as HESCO barriers that surround some prominent campus buildings.

“We anticipate having it all cleaned up, all done, by the time students come back to class next month.”

The barriers were installed as a preventative measure in May to protect against the floodwaters from the Iowa River. The flooding did not get as high as originally projected.

Moore says some of the material used in the barriers can be reused, depending on how the material was impacted by the flooding. “For example, the sand at the barriers at the Mayflower Residence Hall cannot be reused because those barriers were touched by river water. So, the sand is considered contaminated. And so, you would either have to wash the sand — which is and expensive process — or dispose of it,” Moore explains.

“The other barriers that were not touched by river waters, that sand can be reused for things like sanding the streets when the snows come this winter.” Moore says the plan to use the removable barriers was developed after the massive flooding in 2008, and it worked well.

He says that plan will continue to use some of the removable barriers if there is a need in the future. He says they use a combination of removable and permanent flood protection, including what they call the “invisible wall” that’s used around the Art Building West.

Moore says the city is discussing the possibility of raising Dubuque Street, which could help protect the Mayflower Residence Hall. The university expects to spend around five million dollars one the costs are totaled for installing and removing the flood barriers on campus.

Moore says the university is looking into the possible reimbursement of the costs from federal disaster funds. Classes begin for the fall semester in Iowa City on August 26th.