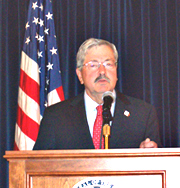 “This is a credit against future tax,” Branstad says. “We anticipate they’ll probably be paying about $50 million in future tax every year, money we wouldn’t have gotten if they’d gone to Illinois.”

Orascom was awarded tax credits as part of a lucrative package of federal, state and local incentives, but state officials promised the company it could come back in 2013 and 2014 and ask for more tax credits.

“So in other words we told them we know Iowa’s corporate tax at 12 percent is the highest in the country. It’s uncompetitive,” Branstad says. “…In order to provide a fair and competitive situation, we felt this was absolutely essential.”

Branstad is also blasting an Iowa City Democrat who is chairman of the Senate Ways and Means tax-writing Committee for blocking Branstad’s call to cut the state’s corporate tax rate from 12 to six percent. Listen to Branstad’s remarks, in response to reporter’s questions during his weekly news conference.

Orascom plans to build a $1.4 billion fertilizer plant near Wever and it’s getting about half a billion dollars in state, local and federal incentives for the project. The Egyptian company is using federal tax exempt bonds to finance construction, for about $300 million in savings. Branstad points to a Farm Bureau estimate indicating Iowa farmers will collectively save $700 million a year in fertilizer costs once the southeast Iowa plant is operating.