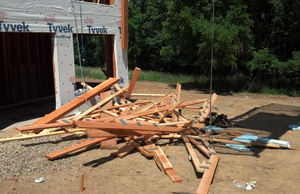 A construction-related accident in central Iowa sent two men to the hospital this morning. Dave Edgar, a spokesman with West Des Moines EMS, says it happened shortly after 11 a.m. in the 1600 block of Walnut Woods Drive.

“It was a new home under construction, a two-story with a walkout, and on the back side of the home part of the structure gave way that two males were on top of…they fell about 30 to 40 feet to the ground,” Edgar says. The men fell on top of gravel and wooden boards.

Edgar says both men were taken to local hospitals. David Evans, 46, was reported in critical condition. Eli Parsons, 35, was in serious condition.