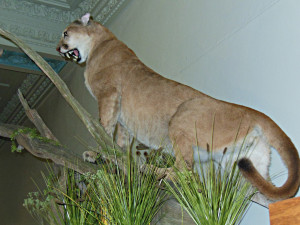 This mountain lion was shot in a Des Moines neighborhood in October 2012. (click to make photo larger)

The Des Moines Police Museum has added a one-of-a-kind and controversial new exhibit to the other items that tell the history of the capitol city’s police department.

A 100-pound mountain lion that was shot by officers in a Des Moines backyard in October of 2012 was stuffed and mounted and now is on display at the museum.

Sergeant Jason Halifax says it is something most never thought would be a part of the department’s history, and that’s why the museum was interested in it.

“Very few people can ever say they’ve seen a real mountain lion live actually — let alone seeing within the city limits — especially a city the size of Des Moines as far as we are from what is typically considered to be natural habitat for a mountain lion,” Hallifax says.

“So, it’s obviously very unique, not only for the Des Moines Police Department, any municipality really.” The Iowa DNR studied the animal to try and get some ideas about its habits before turning it over to the museum. Halifax says the sooting of the mountain lion generated a lot of controversy on-line from those who thought shooting the animal was wrong.

This is how the lion looked after being shot. (DNR photo)

He says many have expressed the belief that officers should have used a tranquilizer gun or tried to remove it without killing the animal.

“It is unfortunate that’s how things worked out. We certainly don’t take any pride or any joy in killing animals, although we certainly do it plenty of times for wounded animals. While this animal wasn’t wounded, it posed a threat to everyone,” according to Halifax.

He says officers acted on their best instincts given the circumstances they were in when they found the animal.

“That’s a large animal, a large very powerful animal. An adult human couldn’t overpower it, obviously a child couldn’t. This animal was four blocks from an elementary school…we don’t carry tranquilizer guns with us, our animal control officers typically do that,” Halifax explains.

And he says using a tranquilizer gun poses problems in itself when you don’t know exactly how big the animal is. “If you put too much in you still can kill the animal. If you don’t do enough tranquilizer, then you’ve got a groggy, cranky animal running loose,” Halifax says.

And he says if officers waited for a tranquilizer gun to be brought to them then the animal could have fled and “then we would have been in a possibly worse situation where we were chasing a maybe scared, maybe hungry animal on the loose in the city limits.”

Halifax says there was not any taxpayer money used to have the animal stuffed as the museum paid a portion of the cost and the Des Moines Police Burial Association paid the balance of it. You will have a chance to see the mountain lion as it will be on loan and on display at the DNR exhibit at the Iowa State Fair.