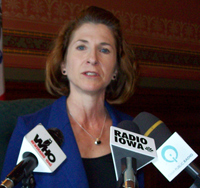 State Auditor Mary Mosiman gives the state budget plan the governor and legislators agreed upon high marks overall, but she is raising a few concerns.

“While there is a lot to commend about this budget, we continue to take steps back in terms of transparency related shifts,” Mosiman says.

According to the auditor, shifting the funding source for an ongoing program from year to year makes it more difficult to track state spending.

Governor Terry Branstad appointed Mosiman state auditor in May. Her predecessor regularly offered his own analysis of state spending plans and she has continued the practice.

“Overall the final action Fiscal Year ’14 budget is an excellent budget that serves Iowans well,” Mosiman says. “We need to work on transparency and we need to be mindful of future obligations so we can continue on a financially sustainable path.”

Mosiman also criticizes legislators for passing a budget plan that did not set aside extra money for state agencies to cover employee pay hikes.

“This will be the fifth consecutive year that salary and benefit cost increases have not been separately funded,” Mosiman says. “If this practice continues without off-setting agency efficiencies, these salary and benefit costs will continue to adversely affect the level of service that agencies can provide.”

Mosiman faulted lawmakers for drawing up a Medicaid budget that’s $31 million short of the best estimate of what it will take to finance the program for the next 12 months. She also raised concerns about state-run pension plans. The Iowa Public Employees Retirement System is 20 percent short of what’s needed to pay pensioners. Other state-managed pension systems are even further behind.