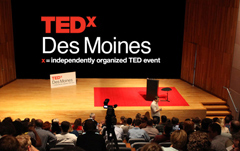 The inspirational, short lectures known as TED Talks are an internet sensation and a central Iowa version is planned for next weekend.

Alexander Grgurich is curator of TEDxDesMoines which he bills as a dynamic mix of local thought leaders who look to spark and guide our collective exploration.

Grgurich says: “We bring together amazing people from across all parts of the region in different industries, whether it be education, science, tech, business, to all unite around ideas worth spreading.”

The one-day “idea conference” features a combination of live, in-person speakers from Iowa and elsewhere, in addition to a series of videotaped excerpts from other TED Talks around the globe.

The phenomenon of TED Talks focus on Technology, Entertainment and Design, in addition to a host of other topics like art, medicine, psychology, sociology and more. “What TED really pioneered is the short-form content, 18 minutes or less time frame, keep it short, keep it to the point, not a lot of filler,” Grgurich says.

“Really, what it’s indicative of is the shift toward, hey, we want you to cut out the part where you’re selling your book and you’re pitching your business, we just want to get to the heart of the idea.” The term “networking” has something of a stigma attached, he says, so this event is focused on what he calls “relationship building.”

He adds, no one will be trying to sell you life insurance, mortgage brokering services or anything else. “You’ll be surrounded by hundreds of other fellow attendees that are all excited and passionate about the community and the region and making the world better,” Grgurich says. “These talks and everything that we do at the event are a catalyst to get you engaging with these people and really going a few layers deep, learn about each other and maybe how you can maybe help each other.”

The is the fourth year for TEDxDesMoines. The event is September 8th at the Public Library of Des Moines. Learn more at: www.tedxdesmoines.com.