You are here: Home / News / Trio articulates span of Syria debate in Iowa 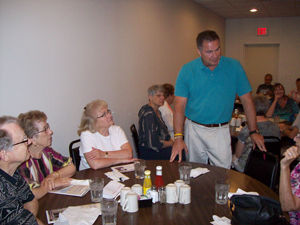 President Obama is in the midst of a public relations offensive to convince Americans the U.S. must respond to a chemical weapons attack in Syria. Three women at a recent political event in Adel illustrate the debate going on within Obama’s own Democratic Party.

Ruth Hensen of West Des Moines attended a community meeting with Congressman Bruce Braley last week. She asked Braley how he planned to vote on a congressional resolution authorizing a military strike into Syria. Afterwards Hensen started talking with the two women sitting next to her.

“I have mixed emotions,” Hensen said. “The only thing that makes me think something should be done is that years ago there were attacks, people were kidnapped, things were not responded to, then there was the USS Cole and we didn’t do anything and a couple of years later there was 9/11. And so when do we take a stand?”

Linda Lemons of Waukee — the woman sitting to Hensen’s left, at a nearby table — is against military action in Syria.

“I sincerely hope we do not,” Lemons said, “just because when we attack somebody, we also have to be accountable for dropping bombs and that also affects relationships.”

“I believe we can take a stand without violence,” Lemons said. “I know I’m idealistic.” Hensen is skeptical.

“How much talking can you do?” Hensen asked. “It’s like the Palestinians and the Israelis.”

Phyllis Briley of Van Meter — sitting on the other side of Lemons — wishes she were privy to the classified briefings members of congress are getting.

“I don’t know what is right,” Briley said. “I hope we choose the right thing to do.” President

Obama will deliver a televised speech tonight from the White House to make his arguement for limited air strikes in response to the Syrian government’s alleged use of chemical weapons against its citizens. It appears the U.S. Senate could vote on the issue Wednesday.