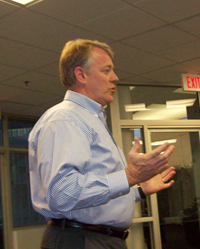 Five candidates have already started their campaigns to seek the Iowa Republican Party’s 2014 nomination for the U.S. Senate, but Mark Jacobs has kept to his “exploratory committee” status since June. Jacobs has not appeared alongside the other candidates at party events, but on Tuesday he was the main speaker at The Des Moines Conservative Breakfast Club.

“I’ve been doing my best rain dance. Am I doing O.K.?” Jacobs joked.

As the rain fell outside, Jacobs spoke of his childhood in Iowa and his experience running a Fortune 500 company in Texas. After his speech, someone in the back of the room asked Jacobs this question:  “You’ve been out of the state for 25 years. Why should we believe that you have your pulse on the beliefs of Iowans?”

Jacobs replied:  “I think that’s a fair question. You know the fact of the matter is all of the announced candidates have spent a significant part of their adult life outside of the state. You know I’d like to think the experiences I got outside of Iowa here have helped me gain a broader perspective of the goings on and the perspectives that we have to address and bring solutions to some of the key problems we’ve got going on in this country today.” 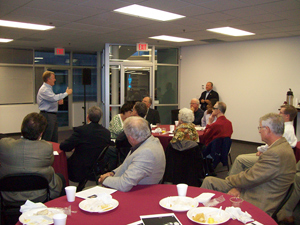 “Now in addition to being a business guy I’m also a life-long Republican,” Jacobs said. “I care very deeply about the principles of conservatism and, like most Republicans here, fiscal issues are at the top of the list of things that we care about and want to address.”

Unlike the other GOP Senate candidates who have appeared before The Des Moines Conservative Breakfast Club, Jacobs did not mention any social issues like same-sex marriage or abortion. Instead, Jacobs spent most of his 15-minute speech talking about his Iowa roots and his prescriptions for “fixing things” in congress.

“Of the 100 senators, 57 are lawyers,” Jacobs said. “…Today, we are dramatically under-represented from people that come from business backgrounds or other types of backgrounds here that really add to the breadth of diversity of perspective that’s so critically important to the legislative process.”

If Jacobs eventually joins the race, he will face off against five candidates, including Matt Whitaker, who is a lawyer. The other candidates are David Young, a former chief of staff to U.S. Senator Chuck Grassley, and Joni Ernst, Sam Clovis and Scott Schaben — all three of whom have served in the military.