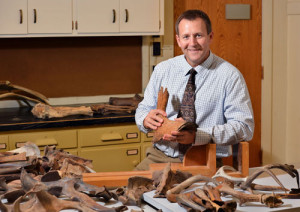 A chance find has led to a string of new information about a large animal that used to roam Iowa. Mathew Hill, and associate professor of anthropology at Iowa State University, said it all started when a an Ames man asked him to identify a piece of an antler the man found in the Skunk River.

“I thought it was a little unusual, it didn’t fit anything I thought it should. And so one thing led to another and I took it to a colleague at the Illinois State Museum where they have a collection of these animals, and he compared it to the Stag-moose and that’s what it turned out to be,”Hill says.

A stag-moose is an animal that Hill says has a face like an elk and a body like a moose. “It was really leggy, really tall and probably occupied an environment somewhat similar to a modern moose. However, what really separated them was their antlers,” according to Hill. “They were kind of like a hybrid between elk antlers and moose antlers. They’re really bizarre.”

Hill was intrigued after identifying the Skunk River specimen and started looking around and discovered another that had been found near Parkersburg, and a third that was found in the 1970s by a gravel pit operator working near Jester Park in Polk County. The Jester Park specimen had been donated and was on display at the State Historical Museum in Des Moines.

Hill decided to find out more about the animals and got permission to carbon-date them. “The results exceeded my wildest expectations. Turned out that the specimen from Jester Park is the oldest one every documented in North America — it’s about  30,000 years old. And then the specimen from Parkersburg is about 12,000 years old and it’s the youngest one on record. And then the one from here in Ames is a little bit older — it’s about I believe it’s about 12-and-a-half thousand to 13,000 years old,” Hill says. 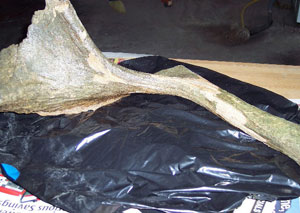 Being able to date the Jester Park specimen as the oldest in North America told Hill a lot more about the animal’s history. “The reason that’s interesting is that it occurs on the Des Moines Lobe. And there used to be a huge ice sheet here in Iowa that met it’s maximum extent about 13,800 years ago and Jester Park was underneath that ice sheet,” Hill explains. “So what happens is, that that animal lived before that ice sheet covered central Iowa. So it had a glacier over it of awhile.”Hill says there are still many things to learn about the stag-moose, such as when they appeared, how many there were, and what caused them to become extinct. The find that started Hill on his search to uncover more facts about the stag-moose is something he’s been seeing more and more of in recent years.”And that’s related to the lower water levels caused by the droughts, but also some of the extreme flood events that we’ve had. Those floods have cleaned off the cut banks and sandbars of existing vegetation and exposed new specimens,” Hill says.

You can see the oldest known stag-moose specimen in North America at the State Historical Museum. It is part of the “Witness to Change” exhibit on the first floor. The museum is open from 9 a.m. until 4:30 p.m. Monday through Saturday.