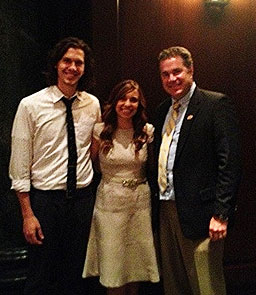 A northwest Iowa couple was in Washington, D.C. today to accept the “Angels in Adoption” award.

Jonathan and Kayla Craig of Orange City were recognized for their efforts to adopt a child from Nigeria. Jonathan Craig called it an “awesome” experience to be around the other adoptive parents who received awards from the Congressional Coalition for Adoption Initiatives.

“This is kind of like the cherry on top of the sundae of bringing Joseph home,” Craig said in an interview recorded by Congressman Bruce Braley’s staff.

The event in D.C. went on, despite the government shutdown.

“We feel very undeserving and we feel very honored and humbled to be around all these people who are doing amazing things for children here and children in other countries and it’s an incredible experience and we feel very thankful,” Kayla Craig said.

In 2011, the Craigs’ adoption nearly fell though due to red tape and errors. Kayla’s father, a Waterloo resident, contacted Congressman Bruce Braley for help and after three weeks of calls and negotiations, officials issued the documents the couple needed for Joseph and the family flew home. Braley credits the couple for enduring “extraordinary hardships” to welcome home their adoptive son.

“They went to the matt for him because they wanted him to have a better way of life,” Braley said.

More than 140 people are honored by congress each year with an “Angels in Adoption” award.