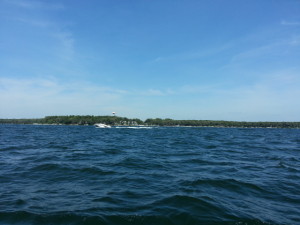 The Iowa Environmental Protection Commission (EPC) today rejected a call for enacting stricter water quality standards for 159 Iowa lakes. The Iowa Environmental Council (IEC) was among the groups pushing for the changes. Josh Crotty, with the IEC, says more signs are going up each summer advising against swimming in lakes because of poor conditions. “We think this problem is getting worse and we’d like to see action on it now,” Crotty told commissioners.

The EPC voted unanimously to reject the petition for the new rules. Jon Tack, an attorney for the Iowa Department Natural Resources, recommended that the petition be denied. “The department feels like it’s premature to adopt these rules without further study,” Tack said.

Crotty pointed out that signs warning against swimming at state park beaches were posted 65 times between 2010 and 2013. “There are lakes getting on the list just within the last few years. We think the problem is getting worse. The sign was posted 20 times in 2012 and 24 times this past summer,” Crotty said.

Iowa Secretary of Agriculture Bill Northey told the commission that the state and landowners are already pumping millions of dollars into efforts to reduce nitrogen and phosphorous runoff in Iowa lakes. Crotty questioned if those measures have a specific goal. “We’re spending all this money on these plans to clean up our lakes, but we’re not even shooting for what people really want to swim in. We think that’s a problem,” Crotty said.

Tack, the DNR attorney, said a “one size fits all” set of numeric standards is the wrong approach to cleaning up Iowa’s lakes. “There’s a lot of variability between lakes and lake systems, and we really don’t completely understand the relationships right now, so it’s hard to adopt a specific number standard for all of the lakes with all of the variability between causes and results in watersheds in Iowa,” Tack said.

Crotty argued the petition was based on a plan initially developed five years ago by a group that included scientists and DNR staff. “What we proposed here is exactly what the scientists proposed back in 2008,” Crotty said. “We didn’t try to tinker with their proposed criteria. They suggested that these criteria were appropriate for all lakes in Iowa.”

Tack said the state needs more time to see if the Iowa Nutrient Reduction Strategy is working before new rules are adopted. And Tack argued that the DNR does have goals when it comes to cleaning up lakes. “We have a goal of four-and-a-half feet of clarity and to sustain that for 50 years,” Tack said. “So we do have goals and outcomes that we’re looking for.”

Tack also noted that setting numeric standards for lake water quality could be revisited. “The issue of setting specific standards for Iowa waters is certainly not dead,” Tack said. “Iowa State (University) is working hard trying to develop that and our staff is continuing to look at that, we’re just unsure how soon we can get there right now.”