You are here: Home / Human Interest / Artificacts dug up at site of new Davenport flood wall 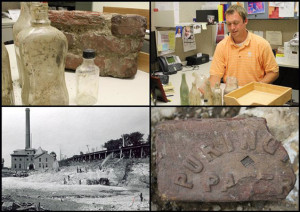 Project manager Matt Pratt and some of the artifacts found at the site.

Workers building a new flood wall in Davenport found several artifacts during their two years of work.  Project Manager, Mark Pratt from the Corps of Engineers, says they found out there was a reason they dug up so many relics.  “When we first started excavating, a lot of this stuff started popping up,” Pratt says, “and in talking with workers at the water company they said this place used to be an old landfill, among other things.”

He says there were dozens of items found from glass bottles to bricks everywhere and broken concrete. Pratt says bottles were from pop and medicine.

Those working on the wall were able to add to their own collection of artifacts. “A lot of the construction workers have their own little bottle collections…I have my own little knickknacks I keep from my own construction projects — like some concrete cores and bricks and stuff,” Pratt says.

The $11-million water plant project will provide flood protection for the plant that provides drinking water for most of Scott County.

Photos courtesy of WVIK in the Quad Cities.