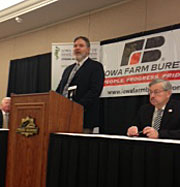 A major Iowa health care provider has put up $50,000 and the Iowa Farm Bureau is donating $25,000 to a loan repayment program designed to encourage new physicians to practice in rural Iowa.

“From our standpoint, this is a no brainer in terms of supporting a way to support students who eventually become primary care physicians who will become that point of access in rural Iowa,” says Bill Lever. president and CEO of Unity Point Health which has  hospitals and clinics in Cedar Rapids, Des Moines, Dubuque, Fort Dodge, the Quad Cities, Sioux City and Waterloo.

“We hope others will see a way to give back to our rural citizens of Iowa and encourage our highly valued graduates to stay in Iowa and serve our rural communities,” he says.

The push is on to raise more donations from the private sector to build an endowment for the Rural Iowa Primary Care Loan Repayment Program. Dr. Doug Martin is president of the Iowa Academy of Family Physicians Foundation, the group that will manage the program.

“In Iowa, just like across the country, primary care physicians practices have a tendency to be focused more on urban and suburban areas and, unfortunately, that oftentimes leaves the rural and border communities with a shortage area,” Martin says.

If the pace of fundraising continues, Dr. Martin expects six or seven spring of 2014 graduates from the University of Iowa Medical School and Des Moines University will receive a $50,000 stipend to help repay their student debt — if they choose to practice in a rural area. Those doctors will be eligible for three more $50,000 payments in each of the next three years if they continue to practice in rural Iowa. Legislators and Governor Terry Branstad agreed to put state tax money into the program, helping to establish the endowment for this scholarship program.

“The state has stepped up with the $2 million appropriation,” Branstad says. “We think that the private sector will also step up as these organizations already have.”

Sixty-two Iowa counties are designated as “primary care shortage areas” by the federal government. Lieutenant Governor Kim Reynolds says it is “critical” to attract physicians to practice in rural Iowa.

“Ensuring physicians are in communities across our state is not only a quality of life issue, it is an economic development issue as well,” Reynolds says.

According to the U.S. Department of Labor, a single primary care physician’s practice supports about six jobs and has an economic impact on the community of more than $930,000 a year.

To be eligible for the loan repayment program, a new doctor must practice in an Iowa community with a population of 26,000 or less and the community must be at least 20 miles away from a major metropolitan area.  The loans will be awarded to new physicians who are surgeons and psychiatrists as well as primary care doctors, as there’s a shortage of those specialties in rural Iowa, too.