You are here: Home / News / Davenport I-80 casino ‘one signature away’ 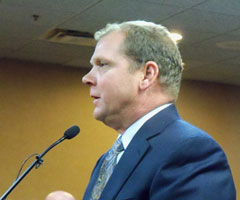 Representatives from the city and the developer of a proposed new casino along Interstate 80 in Davenport told the Iowa Racing and Gaming Commission Thursday they are close to finally getting a deal done — but aren’t there yet.Dan Kehl was chosen by the nonprofit license holder, Scott County Riverboat Development Authority, to build the casino to replace the Isle of Capri riverboat. “I think we are one council meeting away from having this agreement put together,” Kehl says, “hopefully, one and done next Tuesday and we can put our documents in front of you so we won’t loose another construction season.”

The City of Davenport had wanted to use a different developer before agreeing to move ahead with Kehl. Getting everything sorted out has taken awhile, but Mayor Bill Gluba also told the commission it is getting closer.

“We are literally one signature away from the goal we share with the commission to bring and Interstate 80 commission to Iowa and to Davenport,” Gluba says. Gluba however expressed some exasperation about the difficulty in agreeing on the amount that will be paid to the non-profit group to nail down that final agreement. 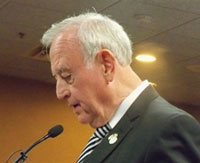 He says the city has tried hard to keep things moving despite frequent changes. “Davenport settled its differences with the Isle or Capri, not going to court. We’ve zoned the property that Mr. Kehl asked for along Interstate 80 to build the casino. We’ve negotiated agreements –two agreements — one before and one after the RDA took action with RDA’s preferred developer,” Gluba says. “We’ve done as much as we can at this time, and we thank the commission for their assistance and shared goal for the state of Iowa.”Gluba asked the commission to give the final negotiations on the non-profit money a little push. “We hope the commission will direct Mr. Kehl to sit down and work out the details. It’s probably between a half-percent and one-and-a-half-percent that’s holding up this deal,” according to Gluba.

Commission chair, Jeff Lamberti, declined to have the commission get directly involved in the issue. “I think for now, I will do what I have done over the past several weeks — is encourage you all to get into a room together, take these small differences and find a way do resolve them. And I would hope we don’t have a similar discussion in January,” Lamberti says. Lamberti and the other commissioners have been pushing for the land-based casino in Davenport to move ahead so they can better compete with an Illinois casino that sits just across the Mississippi River from Davenport.