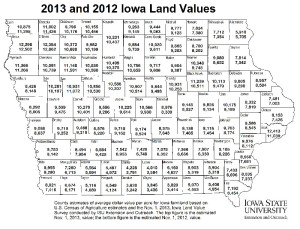 The annual Iowa State University survey of farmland values found the fourth straight record high average for one acre in 2013. Economics professor Mike Duffy who conducts the survey says the average value of $8,716 an acre was up 5.1-percent compared to 2012.

Duffy says the list of most valuable farm ground in the state’s 99 counties saw a new — yet familiar — name at the top. “Scott County resumed being the highest value of land. The past three years it had been O’Brien,” Duffy says. “The interesting thing to me is that in the middle 70’s there were three years in a row where Humboldt was the highest –other than that – Scott County has always been the highest”  Scott County farmland sold for and average of $12,413 an acre, while Decatur County remained the lowest reported land value at $3,628 an acre.

Scott County was part of an eastern growth trend when you look at the land prices regionally. He says the southeast region was up the most, with Scott County seeing the biggest increase for a single county, but several southeast counties as a region saw double-digit increases.

Duffy says the factors pushing the increase in land values in the three previous years continued to figure into 2013’s rise as well. “Low interest rates, and also the higher commodity prices, strong demand for land and overall income, those are all kind of tied in there as well,” according to Duffy.

The price of corn and beans has fallen off in recent months and Duffy says the data show the rate of increase in land values slowed as the commodity prices started dropping after June of this year. He sees other factors that are unknown and could determine of the land values continue a record pace for a fifth year in 2014. 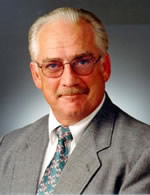 “The Farm Bill, the fact we don’t even know what it is going to be,” Duffy says. He says the unknown future of the ethanol mandate, what’s gonna happen to the price of oil as we’re seeing a shift from petroleum to natural gas, and the uncertainty over the economy in Southeast Asia are all factors.

Duffy says the weather situation is another factor that could impact commodity prices and eventually farmland values. “Right now the land market is kind of looking for direction. In some cases some of the sales are high, some the sales are low to no sale, and the big part of that is the reflection of the uncertainty,” according to Duffy.

Continued record high land values always bring talk of a possible plunge of values that happened with the farm crisis of the 1980’s. Duffy has consistently not believed another big drop is going to happened, and hasn’t changed that view with the current conditions either. “I personally don’t think that we are gonna see a major drop, I think that we are gonna see a correction to the extent that incomes correct. And that’s going to be over a period of time,” Duffy says. The ISU land value survey started in 1941.

You can see more details on the survey at the Iowa State University Extension website at: www.extension.iastate.edu/topic/landvalue.