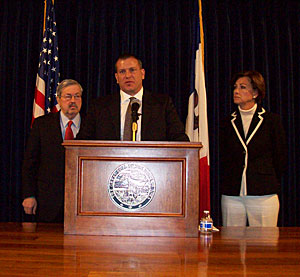 An event will be held at a wind blade manufacturing plant in Fort Madison this afternoon to mark what’s touted as the largest economic development project in the state’s history, but uncertainty about a key federal tax break could doom future expansion in the wind industry.

“For us to continue to do projects going forward, the production tax credit would have to be in place,” says William Fehrman, president and CEO of MidAmerican Energy.

MidAmerican Energy is buying blades made at the Siemen’s plant in Fort Madison for 440 new turbines that will be erected in Iowa. Governor Terry Branstad is among the dignitaries who will be at the Fort Madison plant this afternoon.

MidAmerican is making a $1.9 billion investment in the turbines. MidAmerican’s CEO says the federal tax credit for wind energy production was “very crucial” to the project.

“The production tax credit is fundamental to these kind of projects and we’re continuing to work with our congressional delegations and others to try and continue that credit going forward,” Fehrman says. “It’s not clear exactly where that may stand.”

The tax credit is set to expire December 31, but projects that get underway this month will still qualify for the tax credit.

“As long as the projects are started before the end of this year, those projects are eligible for the (production tax credit),” says Mark Albenze, CEO of the wind power division of Siemens Energy. “So an order at the magnitude of this gives us a stable base for the next couple of years.”

According to Albenze, exports to countries like Brazil, Chili, Peru and South Africa are helping keep the Siemens plant in Fort Madison operating.

“That plant not only supports the United States, but also is a key exporter,” Albenze says, “so that’s been as we’ve had the slow-down this last year, that’s been a key exporter for us and we’re very proud of our employees at Fort Madison and their ability to provide cost-effective blades that can be exported outside the state of Iowa.”

Critics say what was originally a temporary credit to boost the wind industry has lasted for 20 years and has distorted investment in turbines because the credit is so generous.  In 2012, wind power projects accounted for more than 40 percent of newly-constructed electricity generation in the United States.

AUDIO of the governor’s weekly news conference, at which Branstad, Albenze and Fehrman made their comments.