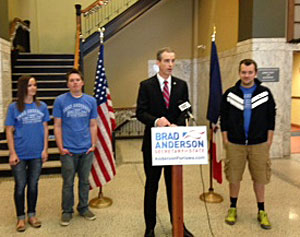 A Democrat who’s hoping to be Iowa’s next secretary of state has unveiled a five-point strategy he says will help Iowa overtake Minnesota, the state with the nation’s highest voter turn-out in the last nine national elections. Brad Anderson says voter participation in Iowa during the 2012 election was higher than it was in 2008, but Iowa only ranked fifth among the states in total voter turn-out.

“Good isn’t good enough,” Anderson says. “We’re Iowa. We should be number one. That should be our goal.”

Anderson would install what’s called permanent absentee voting, letting voters sign up to get a ballot sent to their home for every election. Under current practice a voter must fill out a form and request to vote by mail each time there’s an election. Anderson also says there are way too many elections in Iowa and he’d seek to consolidate elections, althought he plans to meet with officials from cities and school boards before advancing a specific proposal.

“What I’m laying out is a vision which I think is shared by Republicans, Democrats and voters because I think there is a lot of voter fatigue especially in a state like Iowa where even today you have presidential candidates coming,” Anderson says. “We are in a unique position when it comes to our electorate and eight percent turnout is unacceptable to me.”

As for his other ideas, Anderson suggests Iowa should follow 13 other states which are allowing on-line voter registration and, if elected to be Iowa’s top election official, Anderson would create an “election information hub” with information about all elections held within the state’s borders. Republican Matt Schultz, Iowa’s current secretary of state, was expected to seek reelection, but he is now considering running for Tom Latham’s seat in congress since Latham announced this week he will not run in 2014.

Anderson made his comments during a late morning news conference at which he unveiled t-shirts he’ll be giving those who contribute $30 to his campaign.