You are here: Home / Agriculture / Iowa Senators meet with EPA over RFS rule 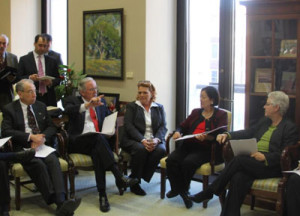 Iowa Senator Tom Harkin says a bipartisan group of senators were able to present their case to EPA Administrator Gina McCarthy for not cutting the amount of renewable fuels required by the agency in the Renewable Fuels Standard.

Harkin, a Democrat, says the administrator didn’t give them anything more than the minimum commitment. “I think the most we got from administrator McCarthy is that they are going to take another look at it — they’re going to review it,” Harkin says. “She stated unequivocally in front of all of us that she was  a proponent of biofuels.”

Harkin responded to McCarthy’s claim of support for biofuels. “I said — and I think everybody else there did too – we’ll okay, but what’s happening with this proposed rule that you put out is taking us in the wrong direction,”Harkin says. Harkin says another point of discussion involved the so-called blender wall. McCarthy told the group there are not enough gas pumps set up to sell E-15 — gas with a 15-percent blend of ethanol. Harkin told McCarthy getting more E-15 pumps is not the issue.  “We don’t need E-15 pumps, the pumps that are out there right now can handle 15-percent, up to 15-percent ethanol right now,” Harkin says. “So there’s no problem.”

Harkin says the concern about pumps is a false one raised by those who don’t want to see more ethanol in the market. “This is just a ploy by the oil companies,” according to Harkin. “As the usage of gasoline goes down — people are driving less, cars are getting more miles per gallon etcetera —  they don’t want to give up any more of the share that they have had in the past.”

Iowa’s other Senator, Republican Chuck Grassley was also at the meeting Wednesday.