You are here: Home / Sports / Hawkeyes from Florida get lots of Outback Bowl ticket requests 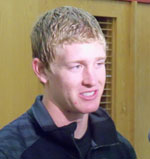 The trip to the Outback Bowl is a homecoming of sorts for the handful of Florida natives on the Iowa roster and while it offers a chance to play in front of a lot of family and friends, getting enough tickets can be a headache.

“I think it’s probably something they enjoy, outside of the ticket nightmare,”  Iowa coach Kirk Ferentz says. “It’s kind of like any time in conference play when you go to your home state, the bad news is everybody’s calling you for tickets, but outside of that I think it’s a good thing and certainly Miami and Tampa are very different and I think this is a great experience and I think everybody will enjoy it.”

Ferentz’s team has started its practice routine in Tampa.  “The Outback folks do just a great job hosting a bowl. Tampa Bay lends itself to a great bowl site and traditionally this has been a great bowl game, so we’re thrilled to be part of it,” Ferentz says. “We’re going to have to work hard to live up to our end of the bargain.”

One of the Florida natives is sophomore quarterback Jake Rudock who says his family is handling the ticket requests. “My parents told a bunch of people straight up that: ‘We only got six,'” Rudock says. “…If I come across some extra, we’ll get some people some tickets, but it hasn’t been too bad.”

Rudock says playing in Tampa makes it much more convenient for his family. “It’s just nice to know my parents don’t have to fly. You know, my family can just drive there and that’s just under a four hour drive. It’s better than a three or four hour flight — a lot cheaper, too, so that’s a good thing,” Rudock says, with a laugh.