You are here: Home / Sports / Hawkeye Marble Big 10 player of the week 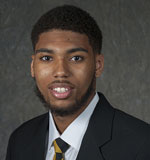 University of Iowa senior guard Roy Devyn Marble has been named  the Big Ten Player of the Week after leading the Hawkeyes to a couple of victories last week, including the  84-74 upset of number 3 Ohio State Sunday. The honor is the first for Marble and first for a Hawkeye since Matt Gatens earned the award, February 27, 2012.

Marble averaged 18.5 points, shooting 60 percent from the field. He averaged 4.5 assists, 3.5 steals and three rebounds in wins over Northwestern and Ohio State.

The native of Southfield, Mich., shared game-high scoring honors in Sunday’s upset win with 22 points. Marble helped lead Iowa to its first victory over a top-five opponent since winning at number 2 Missouri on Dec. 15, 2001. Iowa joins North Carolina as the only teams in the country with a road win against an AP top-three team this season. It marked only the third time in the last four seasons that Ohio State allowed 80-plus points.

Marble scored 15 points, collected six assists and four steals, and had no turnovers in a 93-67 win over Northwestern in Iowa City on January 9th.