You are here: Home / Agriculture / Iowa leaders blast EPA over proposed cut in ethanol use (audio) 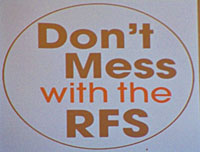 Iowa Governor Terry Branstad was the opening speaker today at a hearing in Des Moines on the EPA proposal to cut the amount of ethanol used in fuel for vehicles in the U.S.  Branstad says they asked the EPA to hold a hearing in the midwest and then scheduled this hearing when the agency declined.

The governor says cutting the ethanol mandate would hurt the many farmers and businesses who built the industry from it’s early beginnings in the 1970’s.

Branstad says the ethanol industry has benefits that go well beyond Iowa. “Including diversifying our nation’s energy portfolio and reducing our nation’s dependence on foreign oil. It’s been a significant move in the right direction for the first time in recent years,” Branstad says.  He went on to say it also reduces pollution and gives consumers a choice at the gas pump, and pointed out that ethanol blended gas is cheaper than regular gas at the pump.

The governor says the industry has grown the economy and the change would kill that growth. “It’s estimated that the EPA would cost 45,000 jobs. We’re trying to create jobs, not destroy jobs in this country,” Branstad says. Branstad says big oil companies have been trying to kill the competition that ethanol creates.

Branstad was first governor during the farm crisis of the 1980’s and says he doesn’t want the cutting of ethanol to trigger something like that again. “I never want to forget what happened, and I never want to return to those bad old days. The EPA should not trigger that kind of a negative downturn in rural America,” Branstad says.

Iowa Agriculture Secretary Bill Northey says the EPA believes there would be no harm in cutting back on the use of ethanol. “I’ve heard it said that EPA has thought that this was maybe a deep breath, that maybe this was good for the industry. I think they’ve heard very, very clearly, certainly if they listen to the things that come out today, what kind of damage this would do to the industry,” Northey says.

He questions whether the EPA even has the authority to make the change. “The legality of EPA being able to do this outside of their authority to grant waivers is in huge question. Most of us would say in this room it is not legal to do what they did,” according to Northey. “They can’t pick and choose something that was not legally provided for them  in the law, to choose  to say this is the basis of a waiver.”    Audio: Northey’s full comments. 8:56 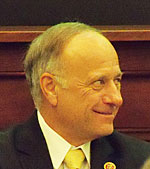 Iowa Congressman Steve King represents western Iowa where a majority of the ethanol in the state is produced. King says farmers created the ethanol industry without any help from the oil companies. “They were not interested in sharing their engineering and their design and their biotech with us, and so you had people who grew up on the farm in places like Minnesota and Iowa who got out their welders and their torch and biochemistry books and said ‘okay we’ll build it.’ And they did,” King says.

King says those same producers pushed to get the ethanol they created into use. “The petroleum industry didn’t want to have a competition within their 100-percent defacto petroleum mandate that they had going into liquid burning fuels on the roads in America, so they wanted to lock ethanol out,” according to King. “It took government to uncrack that market, government to let us into that marketplace. And those decisions were made through the voice of the people reflected through the United States Congress and through the state legislatures.

King, a republican, says the EPA proposal is meant to weaken the ethanol industry so the oil companies can buy it out for pennies on the dollar. “There’ll be support for it then if they own it. Right now they are locking the competition out,” King says. “And the RFS is market access, market access, that’s all it is. It’s not a tax on anybody, it’s a benefit to consumers.”  Iowa’s entire congressional delegation is supporting the effort to block the EPA’s proposed cut in renewable fuels.

Officials from Indiana, Nebraska, Missouri, North and South Dakota, are also scheduled to speak at the day-long hearing.