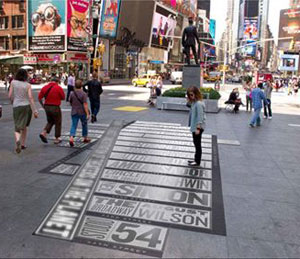 A sidewalk map on Broadway made by Creative Edge.

A southeast Iowa company that creates intricate inlaid flooring has completed work on a large sidewalk project in one of the busiest pedestrian areas of America’s largest city.

“They’re the official Broadway Theatre Association and that has all the main ones, the historic theaters,” Belilove says. “It’s actually sort of a map, street names, there’s a big diagonal which is Broadway, so it’s really the neighborhood of Broadway and Seventh Avenue in Times Square.”

All of the words and other features were carved into the steel using “water jet” machine tools, for very precise cuts. Belilove says the giant map is embedded in the sidewalk and is built to withstand significant foot traffic. “The inspiration was part of the reconstruction of Times Square, making it a much more pedestrian area,” Belilove says. “Some parts of Broadway are actually blocked off now. This is to celebrate the Broadway theaters and this is right in the heart of where all the theaters are clustered.”

The map covers all of the so-called “legitimate” theaters in the area, those with live plays and productions and a venue of at least 500 seats. Creative Edge employs 35 people in Fairfield and marks its 25th anniversary this year. The company has done projects all over Iowa, including at the University of Iowa, the Iowa State Fairgrounds and Principal Tower in Des Moines, in addition to works at Disneyland, in Las Vegas and in major airports across the U-S.