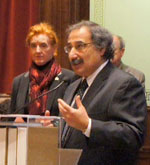 It’s “Canada Day” at the capitol in Des Moines, as dignitaries from the north are visiting Iowa legislators. Canadian Consul General Jamshed Merchant is joking about the weather.

“It wouldn’t be ‘Canada Day’ — celebrating Canada — without snow and snowing,” Merchant said during remarks in the Iowa House. “…We’re really honored to be here.”

Four members of the Legislative Assembly of Saskatchewan — that’s the parliament of the province — are visiting Iowa as well.  The consul general also noted two members of the Iowa State University men’s basketball team are Canadians.

“Melvin Ejim and also Naz Long, who are from Canada, are key parts of your basketball teams here which is really pretty good, right?” Merchant said, laughing.

The Canadian officials were at the statehouse this morning for opening ceremonies in the Iowa House and Senate. The Canadians are hosting a reception for legislators this evening at the World Food Prize headquarters in downtown Des Moines. Merchant, a native of Saskatchewan who works out the consul general’s office in Minneapolis now, will visit Fort Dodge on Wednesday and Thursday.