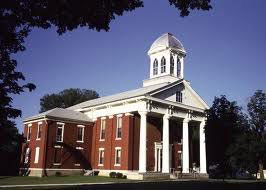 A demolition crew is tearing down the third-oldest county courthouse in Iowa this week. The Mitchell County Courthouse in Osage was built in 1858 and Mary Mills Dunea of Osage was part of the local group that tried to save the structure.

“I think it was a very precious building and its destruction is heartbreaking,” Dunea says.

Local officials say it was just too expensive to repair the courthouse and demolition began on Tuesday.  Dunea was there and shot a video using a drone.

“It was the building that had stood for so long, unaltered — most of it,” Dunea says. “It was the symbol of who we are.” 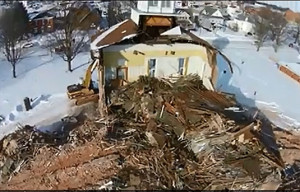 Dunea’s great-grandfather helped build the courthouse when he was a teenager.

“He was 18 in 1858 and he took a job sort of carrying bricks and going to the forest to cut down trees for rafters and that sort of thing,” Dunea says. “…Fortunately he left my family a diary in which he described all of the work he did on the courthouse…so, of course, the courthouse was precious to us.”

Her grandfather came back to Osage after being wounded in the Civil War and ended up serving as the mayor of Osage on three different occasions. The courthouse was constructed 13 years before Osage became a city. It was on the National Register of Historic Places.

Relics and other artifacts from inside the building were removed before demolition began and the local historic preservation group hopes to set up an exhibit.

The courthouse will be replaced with a new $7.2 million structure. That was after voters in the county failed to pass a bond issue to fund the courthouse, with the Board of Supervisors approving funding of the project through the sale of revenue bonds. Those type of bonds do not need voter approval but the interest rate on a sale would be higher.

A meeting is scheduled in Osage at 5 p.m. tonight at the County Services building to answer questions about the new courthouse.

(Video courtesy of Derek Balsley, founder and CEO of The Art of Education)