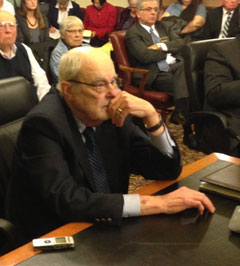 Governor Terry Branstad is defending his Department of Human Services director who last week told legislators he bore “some responsibility” for problems at the Iowa Juvenile Home.

“I think it’s a very difficult job to be the director of the Department of Human Services,” Branstad says. “He’s uniquely qualified for this position and he’s handled it very well over a lot of years and handled a lot of difficult situations.”

In late 2012 the group “Disability Rights Iowa” told DHS chief Chuck Palmer they had uncovered problems at the Iowa Juvenile Home, including the use of restraints and long-term isolation as well as the denial of education to residents in the facility, but Branstad says Palmer did not report those problems to the governor.

Branstad says he did not learn of the problems until last July, when they were first outlined in Des Moines Register articles. “We have met with Mr. Palmer and he has fully cooperated,” Branstad says. “…He is overseeing the changes that are taking place there and I believe that the department has corrected the mistakes that were made at Toledo. We don’t want to ever see that happen again.”

Some Democrats in the legislature have questioned why Palmer did not know of the extent of the problems at Toledo, despite being director of the agency from 1989 to 1999 and returning to oversee the agency in 2011 when Branstad became governor again.

“I don’t know that he knew the problems,” Branstad says.

Branstad doesn’t blame Palmer. Instead, the governor says the managers at the Toledo facility created an air of “secrecy” about the institution.

Palmer told legislators last week the problems at Toledo were “under the radar” and he was “shocked” when Disability Rights Iowa told him in late 2012 of the conditions at the facility. Palmer said he had been operating under the belief things “were going well” at the institution.