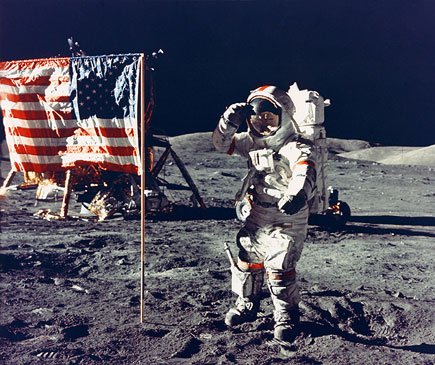 Capt. Gene Cernan on the moon

Only 12 people have walked on the surface of the moon, all of them Americans, and the last man to leave his boot prints there will be in Iowa tomorrow, trying to inspire young people to look skyward.

Cernan, now 79 years old, says his mission today is to spark the fire in students of all ages to launch careers into space.

“Guys like me who have been there, done that, need to keep that passion and re-inspire those young kids to dream,” Cernan says, in an interview with Radio Iowa. “This hasn’t changed in the history of mankind, the dreamers of today become the doers of tomorrow and God help us, we do need some doers in this country.”

Cernan says it’s “very possible” the Chinese will be next to walk on the moon, not Americans, though the retired astronaut remains optimistic about the future of the U.S. space program.

“Golly, we’re looking at a half a century now almost, certainly over 40 years since I last walked on the moon,” Cernan says. “I find young kids of almost all ages excited and interested in what this country has done and what it can do and what their dreams are about the future.” 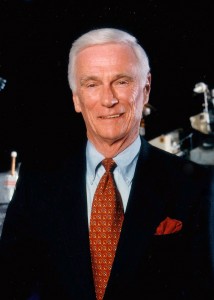 In recent years, NASA has cancelled plans that would have taken explorers back to the moon and the space shuttle, what Cernan calls the finest flying machine man has ever built, was retired with no replacement.

“We were the leadership in space technology, the leadership in the world of space and today about the only thing we do is take clean laundry to the space station,” Cernan says. “We can’t even put an American in space on a ‘Made in USA’ piece of hardware which is deafening for me to hear and to realize and to see it happening today.”

Cernan calls himself a realist, not a pessimist, and he believes we’ll eventually return to the moon — and go well beyond.

“To give a chance to those dreams of those young kids to come true, we’ve got to give them an opportunity,” Cernan says. “Without a goal, which we don’t have today in space, without a mission, which we don’t have today in space, it’s hard to entice them to create the technology which is going to take us back there and someday, I believe, to Mars.”

Cernan will speak at 1:30 PM Thursday at Des Moines Area Community College in West Des Moines. His talk is free and open to the public.

Read Part 1 of this story HERE.