You are here: Home / Sports / Burlington Notre Dame downs Janesville 65-58 in 1A semifinal 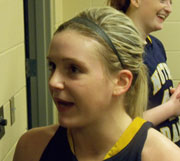 Third-ranked Burlington Notre Dame overcame a double-digit second half deficit to down second-ranked Janesville 65-58 and moves on to the class 1A championship game.

Burlington trailed 34-26 at the half, and coach Kollin Alfred says they had to refocus in the second half. “The adjustments that we made at halftime were energy and commitment to what we decided we were going to do in this game, and we came out and did it in the third and fourth quarters, “Alfred says. “We didn’t play a very good first half, we were ice cold and we just made a commitment to stick with the game plan and do what we needed to do. And the girls carried it through with a lot of energy and excitement.”

The Nikes were called for 12 fouls to Janesville’s 6 in the first half.  “That foul trouble led to complacency and led to not wanting to play the game hard. And trying not to foul instead of just playing the game,” according to Alfred.

Junior guard Taylor Hickey took over late when after her team got the lead, and Alfred says she is an all-state player.  “As she goes, we go, and it’s very nice sitting on the bench knowing that I have a ball handler of her caliber to carry us through that third fourth quarters,” Alfred says.

Hickey was disappointed her team’s effort in the first half. “That first half was not us — that was not our game. So in the second half we came out and said we were going to play Notre Dame basketball, we were going to push the ball and we were gonna finish. We were  really gonna concentrate on finishing in that game,” Hickey says.

Hickey summed up the importance of the semifinal win. “We just made history. This school has never been here, been to the state championship,” Hickey says. “It’s a great feeling.”  Hickey led the Nikes with 18 points, Courtney Coffin had 12, Riley Kilbride 11 and Kori Mesecher had 10.

Janesville lead by 11 with 7:52 to go in the third quarter.  Janesville, and coach Steve Chidester and his team also made history with their first trip to state.  “I told them I am really proud of them.  Proud of the season that we had.  I thought we had a great first half. I thought we had a few miscues in the second half, I don’t know why, probably a little bit of their pressure,” Chidester says.

Janesville saw the foul situation flip on them in the second half as they got in foul trouble, but Chidester was pleased with the way they hung in.”It’s our first time getting down here and I thought we played like we’d been down here before. Played with a very high scoring team and were able to do some of the things we wanted to. Getting in foul trouble probably didn’t help us either,” Chidester says. He says the community, the administration, student body and so forth,” Chidester says. 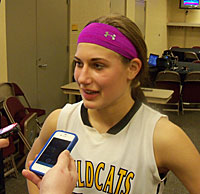 Wildcat junior guard, Kendyl Sorge, says they had some trouble when Burlington made their run. “There was a lot of turnovers, I don’t know if it was the nerves, I don’t know what was going on,  we just started turning the ball over and they were shooting threes and driving and the whole game just started going their way,: Sorge says.

Sorge talked about the first trip to state in basketball and advancing to the semis after winning a volleyball title and getting to state in softball. “This was really good for us I think, because we’d never made it to state before ever, and it really shows we can make it to state in other sports too, “Sorge says. Victoria Leyh led Janesville with 14 points, Sorge and Brittany Hanson each had 12. Janesville ends the season at 24-2.

Burlington Notre Dame is 23-3 and will meet Newell-Fonda (24-2) in the 1-A state championship game tomorrow night at six o’clock. Newell-Fonda is last year’s runner-up, and advanced with a 36-21 win over Colo-Nesco.