You are here: Home / Health / Medicine / Statehouse debate over medical marijuana has risen “to a different level” 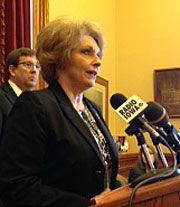 Legislative leaders like House Republican Leader Linda Upmeyer say the tide may be turning for efforts to legalize the use of marijuana for medical purposes, although they don’t expect legalization to happen this year.

“The discussion has risen to a different level or changed appreciably this year,” Upmeyer says.

Upmeyer, who holds a masters degree in nursing, says legislators “want to be educated” because “technically it’s very challenging” to write a law that would legalize marijuana use in limited circumstances.

“But I think there is interest, certainly,” Upmeyer says. “The moms…who testified make a very compelling argument for folks to at least study this issue and see what’s possible.”

Sally Gaer of West Des Moines is a mother who has told her story, twice, during public events at the statehouse this year. Gaer’s 24-year-old daughter, Margaret, has a rare form of epilepsy.

“We want the ability to have cannabis as a treatment option for Margaret in Iowa. We want this option available for other Iowans as well who suffer from life-threatening, debilitating diseases,” Gaer told a senate committee this past week. “The medical evidence is overwhelming that cannabis has accepted medical benefit. Epileptic patients are witnessing miracles with cannabis in the form of a oil, edible pill, juiced or vaporized.”

“I think there’s a lot of people in the legislature that understand that,” Gronstal says. “I think there are still a great number that have significant resistance to doing anything on that front.”

If the legislature “goes down this path” of legalizing medical marijuana, Gronstal predicts it will be “highly limited” and will not be made available for just any medical malady.

“I guess we’ll see if there’s a consensus that can develop around that,” Gronstal says. “At the moment, it seems like a long shot.”

Twenty states have legalized medical marijuana. Illinois is setting up a medical marijuana program this year.  Fifth-nine-year-old Connie Norgart, a retired nurse from West Des Moines, suffers from chronic, severe pain due to post-polio syndrome and she pleaded this past week with legislators to change Iowa law.

“Last year I tried cannabis for two months. Within two months I had weaned myself off of all my pain medications…I slept all night and was pain-free. I had not experienced this in years,” Norgart said. “Why did I take a chance of being arrested and deemed a criminal?” Norgart asked, her voice cracking with emotion. “Because I want a quality of life. I want to be pain-free.”

A retired neurosurgeon who spoke to a senate committee this past week said he’s not interested in the “recreational effects” of marijuana, but he told lawmakers it’s time to acknowledge marijuana “does work” as a treatment for chronic pain, for nausea and for seizure control.