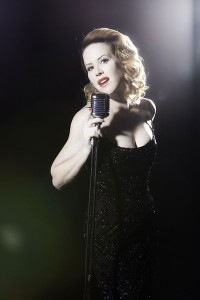 An actress best known for a string of movies she did as a teenager in the 1980s will be in Iowa this week in hopes of drawing an audience for another one of her creative talents.

Millions know Molly Ringwald from her roles on-screen as one of the so-called Brat Pack, but her first performance was on stage, singing with her father’s jazz band at a very tender age.

“I was three-and-a-half and it was in front of the California State Fair,” Ringwald says. “That’s pretty much what I grew up doing until I, you know, got a little sidetracked with the whole acting thing. Acting and singing and writing are all things I did simultaneously. It just took a while to do the singing thing professionally.”

Her album, “Except Sometimes,” was released last year, but it’s not her first compilation. “I actually recorded an entire album when I was six years old,” Ringwald says, laughing. “Yes, I do have it on vinyl. It fetches quite a nice price on eBay.”

The 46-year-old mother of three says she adores the jazz standards and will be performing from the Great American Song Book. “I have a jazz band I usually travel with, a pianist and a bass and drums and a sax,” Ringwald says. “They’re great musicians and it’s music that I love to sing so it’s usually a really fun night.”

The song line-up may even include something by the 1920s jazz legend from Davenport. “Oh, I love Bix Beiderbecke,” she says. “He’s really one of my father’s favorites so I grew up listening to him.”

Ringwald has authored two books and is working on a third novel. She continues to act and had a lead role as the mother on ABC Family’s “The Secret Life of the American Teenager,” which ended its five-year run in 2013.

Whatever she does, the California native may never outshine the now iconic ’80s movies that made her famous. “People know me for the (director) John Hughes films,” Ringwald says. “Even a lot of the fans of ‘Secret Life’ pretty much all know those movies, because they cross over generations. I usually get somebody recognizing me from ‘Pretty in Pink’ or ‘Breakfast Club’ or ‘Sixteen Candles,’ and then they say, ‘Oh, and by the way, I loved you on Secret Life.'”

The final track on her new disc is a cover of “Don’t You (Forget About Me)” by Simple Minds. The original song was on the soundtrack to “The Breakfast Club,” and she dedicated her cover to “the memory of J.H.” — referring to John Hughes.

Ringwald performs Friday at the Temple Theater in Des Moines.