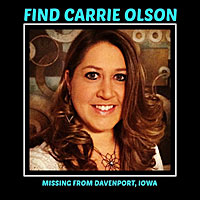 The body of a Davenport woman who was reported missing several months ago has been found in Minnesota. Authorities say the body of 29-year-old Carrie Olson was found by a landowner in a wooded area southeast of Minneapolis on Saturday.

The Dakota County Sheriff’s Office says the body appeared to have been there less than 36 hours. Davenport police began looking for Olson when she failed to show up for work December 30th. She was last seen December 29th at a Rock Island, Illinois, gas station. Since then, her friends and family have been searching for her and holding prayer vigils.