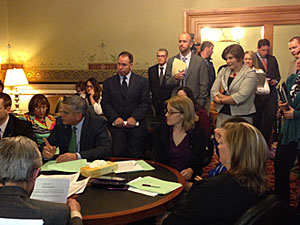 A senate subcommittee has approved a bill that would let the parents of children with a severe form of epilepsy go out of state to get an oil-based form of medical marijuana for their children. The bill will be considered by a full senate committee sometime after five o’clock today.

Sally Gaer has a 24-year-old daughter who suffers multiple seizures every week, despite the powerful prescription drugs she takes.

“So this is huge for us, to be able to have something that could possibly stop her seizures, reduce her profound side effects and give us a better quality of life,” Gaer told legislators today.

Maria La France has a son with severe epilepsy.

“Parents of epileptic and special needs children should not have to move,” La France said, “so whatever law would protect us from criminalization would be a blessing.”

The bill would decriminalize possession of cannabis oil, which La France and others say does not contain the properties that make someone high, but does provide relief to those who suffer seizures. Steve Lukan, the state’s drug czar, isn’t sold and suggests some “very potent forms” of marijuana might be brought into the state if the bill becomes law.

“We have a lot of young people today who are getting very confused because of the debate,” Lukan says. “Here in Iowa we already have 2,700 young people who had to go to drug treatment programs last year for marijuana. We have about 57 percent of our traffic incidents involving drugs….(where) we find THC present, so this is a very serious drug in its raw form and I want to really clarify that and make sure people understand that.”

Republican Senator Charles Schneider of West Des Moines, a member of the subcommittee, said the bill is “as narrow as possible” and would not allow Iowans to get marijuana cigarettes as a medical treatment.

“Iowa will not recognize any potential medical marijuana possession that goes beyond cannabis oil for people who’ve been diagnosed with intractable epilepsy,” Schneider said. “It doesn’t go any further than that.”

“It’s not FDA approved. We just don’t know if it will cause more good than harm,” Yeast said. “We don’t know if families use it for their children that maybe four years from now they could contract cancer or something like that.”

The hospital supports clinical trials instead and Yeast points to a cannabis oil trial that will begin shortly at the University of Iowa.

Governor Branstad recently expressed a willingness to consider making this marijuana derivative available in oil form for Iowa patients who suffer daily seizures, sometimes more than a hundred in a single 24 hour period.