You are here: Home / Fires/Accidents/Disasters / Cooler weather keeping number of tornadoes in Iowa down 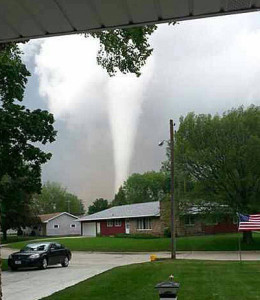 This tornado hit Belmond in June of last year.

Only two tornadoes have touched down in Iowa this year so far, well below the average of around 15 by this date. Nationwide, not a single tornado death has been recorded this year, the first time that’s happened this far into spring since 1915.

Meteorologist Jeff Johnson, at the National Weather Service, says the prolonged chilly weather may be frustrating for Iowa farmers, but it helps keep twisters at bay. “There’s been thought that maybe it’s due to the cool spring we’ve had nationwide, especially east of the Rockies,” Johnson says. “Cold air and tornadoes don’t mix well so you need the warmer air moving north to get the clash of the air masses and to get the conditions that are necessary for tornadoes.”

Iowa gets an average of 46 tornadoes per year, but the numbers have been down significantly in recent years. “In Iowa, it’s been quiet since really 2011,” Johnson says. “There was a period of time from May of 2012 to May of 2013 where Iowa went for nearly a calendar year without a single tornado. I think we were just four days short of that.”

While Iowa’s only seen two tornadoes this year — in south-central Iowa in March and in east-central Iowa in April — Johnson says we need to remain vigilant. “Historically, once we move into May, the tornado season really cranks up,” Johnson says. “May and June typically account for about 70% of our tornado figures for the year.”

Tornadoes kill about 60 Americans each year, on average, though more than 550 people died in twisters in 2011, including 158 deaths in the huge Joplin, Missouri, storm. Iowa, he says, has been relatively lucky. “Since the late 1980s, we’ve had about 25 deaths in the state and if you draw that out, we’ve had less than one death per year,” Johnson says. “We’ve had some really bad years, such as 2008 in which we had more than 10 people killed in the Parkersburg event and also in west-central Iowa. A lot of years, we don’t see any deaths in the state, thankfully.”

That tornado on Memorial Day weekend in 2008 was a mile wide and killed seven people in Parkersburg, injured dozens and destroyed more than 220 homes, about half the town.