A relatively new restaurant in central Iowa has been selected as this year’s winner of “Iowa’s Best Burger” contest.

The Brick City Grill in Ames is owned by Jason Mikkelsen. “We’ve only been open for almost a year now, so to get an honor like this so soon, it’s definitely a surprise,” Mikkelsen said. “But it makes all the hard work…it makes it worth it.” 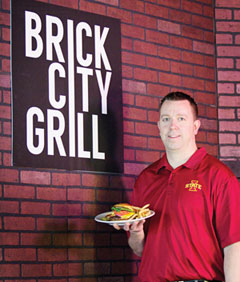 He says the secret to a good burger is in the beef. “We use a flat-top grill to sear in the flavor. All we use for seasoning is just a little salt and pepper,” Mikkelsen says. “We have a really good bun, it’s a brioche bun that we toast.”

Mikkelsen uses a proprietary blend of Iowa beef, delivered fresh to the restaurant. Brick City Grill has eight varieties of hamburgers and they’re far and away the most popular items on the restaurant’s menu.

“Oh yeah, by far, we go through probably three times more burger than we do everything else,” Mikkelsen says.

This is the fifth year for the Best Burger contest, sponsored by the Iowa Cattlemen’s Association and the Iowa Beef Industry Council. Iowans submitted more than 9,600 nomination votes for 456 restaurants in February and March that selected the top 10 restaurants.

Those 10 restaurants were then independently visited and judged based on the hamburger’s taste, appearance, and proper serving temperature (160 degrees).