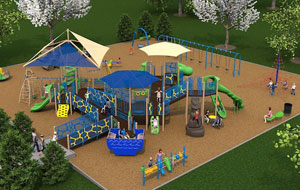 Design view of the Okland playground.

A groundbreaking ceremony was held Monday in Des Moines for what will become of one of the biggest playgrounds in Iowa. It’s being designed for children with cognitive and physical disabilities and will be named for a real estate agent who was killed just over three years ago.

Okland was just 27 years old when police say she was shot to death while working at an open house in West Des Moines on April 8, 2011. Investigators have not identified any suspects and the case remains unsolved. Fundraising for the playground to be built in Okland’s honor has surpassed the $500,000 goal. “Because of the overwhelming response and because the fundraising went so well, not only are we going to be able to provide a playground, we’ll be providing a shelter that will be adjacent to the playground,” McMichael said.

Construction on the playground, located at Ewing Park on Des Moines’ southeast side, is expected to be completed in July. According to McMichael, there are 42 public playgrounds in Des Moines, but this will be the first one catering to kids with physical and mental disabilities.