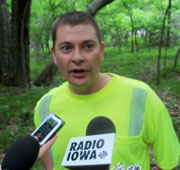 Modern technology has allowed experts to uncover a 100-year-old training site at Camp Dodge near Johnston. The site north of the current Iowa National Guard base contains a series of trenches that were used for World War I training.

Once the war ended, the barracks and buildings were torn down, the wood sold off, and the former open field eventually became overgrown with trees.

After years of wondering about the site, Jamie Conley of the National Guard was able to find it using high tech radar maps that can see through trees and plants. Conley says he noticed an odd looking area at the edge of the shooting range that was covered in dense vegetation. “So, it was kind of odd that we got all these, what looked like building foundations, right in the middle of the trees,” Conley says.

Conley knew he was onto something after going to the area he had pinpointed on the satellite map. “And we came out here, and we just walked the area and we realized that this could possibly be the trench system that had been missing,” Conley says. “And it’s pretty complete, so it’s a nice find for the state.” Since bullets from the shooting range fly into the area, it is generally off limits to people.

Conley says hunters are allowed into the woods at times, and some had wondered about the small trenches among the trees and growth. He says he talked to several people who had a feeling there was something there, but couldn’t put a finger on what it was. He says you can’t get the whole picture by looking at one area, but after walking the area, the picture of what it was jumped out at him. 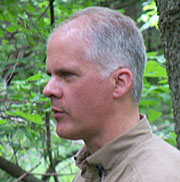 Iowa Goldstar Military Museum curator Mike Vogt says the trench training was a key part of the preparation of soldiers for World War One. “In the first World War, weapons like magazine rifles, high explosive ammunition, rapid-fire artillery pieces, favored the defense. And so the western front became mired down in a complex of trench systems running all the way from the coast of Switzerland to the North Sea on the north coast of France and Belgium,” Vogt says. “So American soldiers when we got involved in the war — two-and-half years after the Europeans had engaged in combat — realized that was the nature of warfare.”

Vogt says General John Pershing, the U.S. commander, preferred a faster, mobile military, but the situation in Europe demanded that they train for the trenches.

“During World War one, 130,000 soldiers trained here at Camp Dodge. Those that were assigned to infantry units, signal units, ordinance units, would have trained in this trench complex and were prepped for combat in Europe,” Vogt explains.

Vogt says finding the site is like finding gold for archeologists. “One of the questions that was asked earlier is ‘why is this complex important?’ The most simple reason is, it is the only existing World War One training complex in the state of Iowa,” Vogt says. There are two other know World War One training complexes — Camp Shelby in Mississippi and Camp Upton, New York — which have been evaluated. 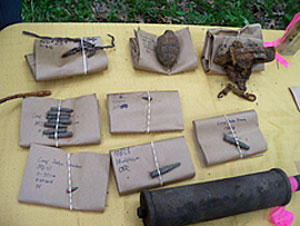 Artifacts found in the World War I training area of Camp Dodge.

Adam Meske of Wapsi Valley Archeology of Ames, was called in to help evaluate the site. “What we’re doing, is we’re using a metal detector right now. And we’re looking for hot spots, when the metal detector starts buzzing. We’re looking at random intervals as this time,” Meske says.

The archeologists have so far found items in a majority of the areas where they’ve gotten hits on the metal detectors. “The artifacts that we’ve found thus far…have been training grenades, we’ve found several types of ammunition shells, we found wire for revetment, as well as different types of barbed wire,” Meske says.

The area was used for training after World War One, and Meske says they’ve also found some artifacts from different areas including shells from the Vietnam War era.

The Iowa National Guard is spending $10,000 on the initial phase of identifying and marking the area. The hope is to eventually have the area named to the National Register of Historic Places. 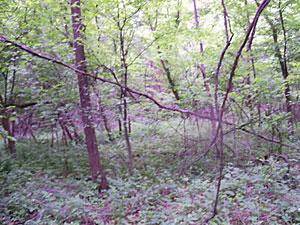 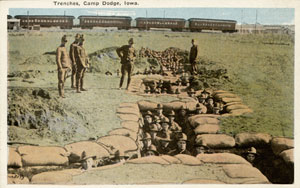