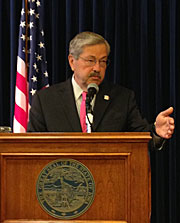 Governor Terry Branstad says state tax collections have taken a nose dive and that’s one reason he vetoed a $140 million  spending package lawmakers passed in the closing hours of the 2014 legislative session.

“I have a responsibility to make sure that our budget is sustainable for the long term and revenue has fallen off over $100 million since the legislature adjourned,” Branstad said during his weekly news conference.

The other reason Branstad vetoed the bill is because he wants to keep enough unspent cash in the state budget to be pay local governments to cover reduced commercial property tax rates. Those rates were reduced by action in the 2013 legislative session.

“We made major commitments in 2013 to property tax relief which is $4.4 billion over the next 10 years and we made commitments to local governments that the state would fund that and replace the property tax with state revenue,” Branstad said. “We also made a major committment to our children and to our teachers through the teacher leadership program which ramps up and costs additional money in each of the next several years.”

According to Branstad, the drop in state tax revenue during the month of May is because of a decline in Iowa’s ag sector and he blames uncertainty over how the Obama Administration may decide the Renewable Fuels Standard.

“We’ve got to continue to be very frugal and very careful with how we spend our money,” Branstad said.

“The state is sitting here with close to a $900 million surplus,” Hatch said. “It’s a matter of priority, it’s true, but state revenue is projected to grow enough so that we can provide that kind of proposal. I think he’s overestimating the loss in this fiscal year and next.”

Other critics of last year’s property tax deal argued the state would not be able to afford to cover reduced commercial property taxes for local governments.