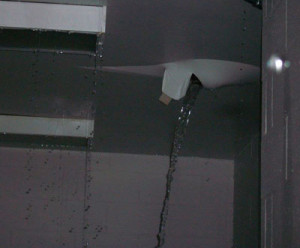 Water pours through the roof of the Newton prison. (Department of Corrections photo)

Officials say a dormitory for 54 inmates was inundated with water, but all the prisoners and staff were evacuated safely. The prisoners were transferred to other areas of the Newton Correctional Facility campus. A statement issued by the Iowa Department of Corrections indicates the dormitory is “structurally sound” and a “rapid response” to the situation has “helped mitigate the water damage.” The dorm will be back to normal “within the next couple of days.”

The dormitory is part of what’s called the “Correctional Release Center.” It’s a low-security unit for inmates who are making the transition to work release or parole.