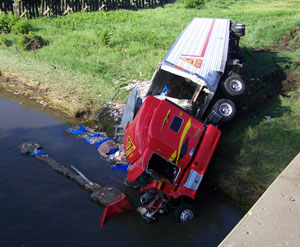 This semi crashed and spilled beef trimmings into the Floyd River.

A semi crashed through barricades along a bridge and plunged into the Floyd River near Merrill about 2:00 a.m. The truck, owned by the B.T. Incorporated of LeMars, was hauling beef trimmings to be used to make sausage.

The driver, 55 year old Michael Wichner of Sioux Falls was taken to a Sioux City hospital, where he has since been released.