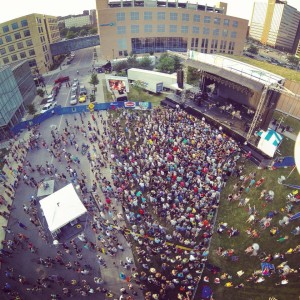 While many Iowans are gathering for parades, ballgames, and fireworks on this Fourth of July, thousands more are attending an annual, two-day long music festival in downtown Des Moines.

Festival organizer Amedeo Rossi admits he had trouble solidifying the lineup as many people – including musicians, don’t want to work on a holiday. Other bands simply weren’t available.

“So many bands go to Europe during this time of year and other bands are routing around the country. So, it took some more time, but we’re pleased with the lineup we got,” Rossi said.

More than 50 other bands are part of the outdoor festival, with three stages in the Western Gateway Park in downtown Des Moines. This marks the 7th year for the 80-35 Music Fest, which typically draws 7,000 to 8,000 people per day into the paid portion of the festival grounds. “We estimate at least that many (people) come to our free area as well,” Rossi said. “We have two free stages and a bunch of activities at no charge.” Learn more online at 80-35.com.