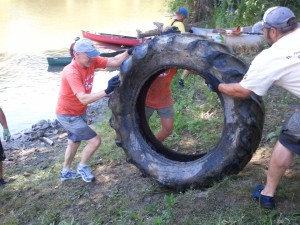 This year’s expedition will focus on 91 miles of the Big Sioux River between Sioux Falls, South Dakota and Westfield, Iowa. Seigley says it’s always unclear what the volunteers will find, but they’ll definitely be busy. “Staff have been out doing some pre-scouting and we know there’s trash out there,” Seigley says. “Pretty much anything and everything, in terms of household appliances, tires, old scrap metal, and old dump sites along the river.”

This marks the first time in the 12 year history of Project AWARE that the Iowa DNR has partnered with a neighboring state. The expedition runs from July 12 to 19. “We’ll probably have about 350 to 400 volunteers throughout the week,” Seigley says. “Part of the flexibility with Project AWARE is you can come for one day, a couple of days, or the entire week.”

Volunteers are offered free tent camping and learn about watersheds, water quality, and other natural resource topics during nightly programs. Seigley says around 85-percent of the volunteers this year have never recreated on this particular section of the Big Sioux River. “So, it brings people to the area. It gives them an opportunity to experience the Big Sioux River, learn about the communities along the way, and the archaeology and geology,” Seigley said.

Last year, Project AWARE volunteers pulled over 68,000 pounds of trash from the Des Moines River in north-central Iowa. Seigley said 88-percent of that trash was recycled.