You are here: Home / Fires/Accidents/Disasters / Semi smacks squad car on I-80, near Atlantic 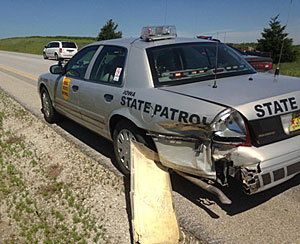 A State Patrol trooper was treated and released after his car was hit by a semi near Atlantic.

An Iowa State Patrol trooper was treated and released from Atlantic hospital after a wreck on Interstate-80 in western Iowa late this morning.

According to the accident report, the trooper was in his patrol car, buckled in, with his vehicle positioned to direct traffic around another accident in the westbound lanes of I-80.

Authorities say a semi driver reached to retrieve something inside his cab and when he looked back up realized traffic ahead had slowed substantially. The semi veered to avoid the line of traffic and ran into the back of the trooper’s patrol car and then into a guard rail.

The trooper was taken to the Atlantic hospital as a precaution. The semi driver was not hurt.