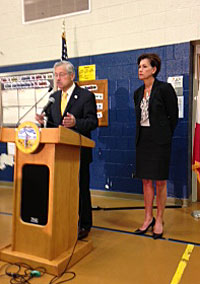 Governor Terry Branstad says he’s leaving the decision on revamping the funding formula for the three state-supported universities to the board that governs the schools and does not plan to push for changes.

“The Regents have taken on and I think in a very thoughtful and systematic way reviewed the funding formula by which state appropriations is distributed among the universities — a system that had not changed for 45 or 50 years,” Branstad says.

There are far more out-of-state and foreign students attending Iowa and Iowa State as compared to UNI, which means the two schools collect the more expensive out-of-state tuition from those students. UNI’s student body is mostly made up of Iowa residents who pay cheaper in-state tuition.

In early June the Board of Regents approved a plan that changes the way state tax dollars are allocated to the three universities and Branstad says those changes are “frankly long overdue.”

“I believe that they, not the governor and legislature, are the appropriate body to make that determination,” Branstad says. “…I would also point out that this is going to be phased in over a period of years and it can be and it should be adjusted if it turns out there are problems with it.”

Branstad says the Board of Regents on this and other issues is providing an appropriate “buffer” that protects academic freedom at the universities from the “political decision-making” of legislators and the governor. University of Iowa faculty and staff have raised concerns that research activity and graduate programs that produce doctors, dentists and lawyers are short-changed under the new formula. Advocates for the University of Northern Iowa say the Cedar Falls school has been short-changed over the past decades in terms of state funding compared to Iowa and Iowa State.